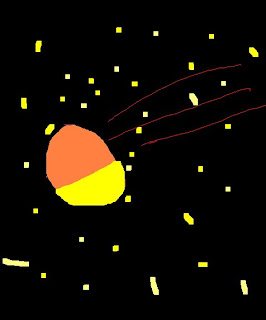 Once there was a full moon, and Hilary knew that that meant "SHOOTING STARS!" When Hilary looked in her telescope there was a strange looking shooting star, it looked like a pill. The pill was actually a rocket ship, and Hilary and her brother Sam met two Plutonians with the same name and face as their own. They were suprised to meet Plutonian Hilary and Sam. They quickly became best friends. With the help of the pill-shaped rocket ship, they were able to travel with them to Pluto and discovered that Pluto was the same as Earth, same people, same things, same countries and languages even! The difference was that everything, including plants were red and white. With the help of their new friends, Hilary and Sam were able to travel to Pluto once a month without their parents noticing and make many new friends.